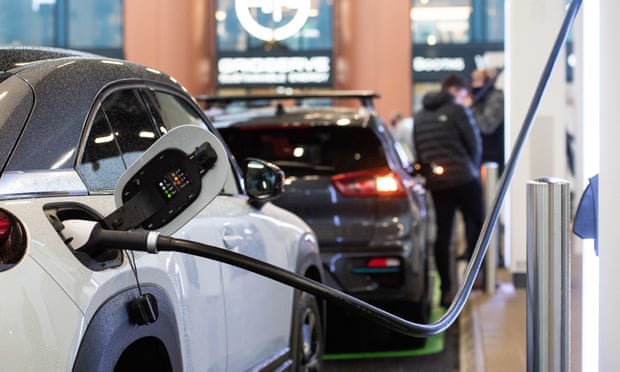 Britain’s energy regulator has approved a £300m investment spree to help triple the number of ultra-rapid electric car charge points across the country, as part of efforts to accelerate the UK’s shift to clean energy.

Ofgem has given the green light for energy network companies to invest in more than 200 low-carbon projects across the country over the next two years, including the installation of 1,800 new ultra-rapid car charge points for motorway service stations and a further 1,750 charge points in towns and cities.

The investment will be undertaken by regional network companies to benefit urban areas including Glasgow, Kirkwall, Warrington, Llandudno, York and Truro. It will also cover rural areas, with some charging points aimed at commuters at train stations in north and mid-Wales.

The regulator hopes the extra investment to make car charging points more convenient will help to address motorist “range anxiety”, which is frequently mentioned as a key reason why drivers are wary about choosing an electric vehicle over a fossil fuel model.

The UK plans to ban the sale of new petrol and diesel cars from 2030 and phase out hybrid vehicles from 2035 as part of its plan to reduce road transport emissions. However, only 11% of new car registrations last year were for ultra-low emission cars.

The regulator’s chief executive, Jonathan Brearley, said drivers “need to be confident that they can charge their car quickly when they need to” if the UK hoped for a “rapid take up” of electric cars, which “will be vital if Britain is to hit its climate change targets”.

The transport minister Rachel Maclean said the investment would add to the 500,000 electric cars already on the UK’s roads “as drivers continue to make the switch to cleaner, greener vehicles”.

The spending initiative, which will add 65p to customer bills for the next two years, will also include new projects to upgrade Britain’s electricity grids so they can power more low-carbon heating and connect to new low carbon energy projects such as windfarms and solar arrays.

Brearley said the investments were a “down payment” on the £40bn of green investment that is expected over the next seven years to power the UK towards its ambition to cut carbon emissions to net zero in the next 30 years.

The CBI, the business lobby group, said on Monday the UK could unlock nearly £700bn in growth opportunities by 2030 by decarbonising the global economy and growing trade as it emerged from the Covid-19 pandemic.

Alongside the regulator’s £300m spending programme, the government has revealed a £166m fund to support new green technologies. The cash injection will include £60m to help develop low-carbon hydrogen, £20m to help roll out projects to capture the carbon emissions from heavy industry, and a further £20m for fund research into “industrial decarbonisation” run by Heriot-Watt University.

The funding for the government’s green industrial revolution will also include £37.5m to help the UK become a leader in technology which can remove carbon emissions from the air. One so-called “direct air capture” project to win government support was put forward by the Sizewell C nuclear plant, which plans to use the reactor’s extra electricity to run the carbon capture equipment.

The energy minister Anne-Marie Trevelyan said the “major cash boost” would target the UK’s most polluting industries to encourage “the technologies we need to rein in our emissions and transition to a green economy” while reducing costs for businesses and boosting investment and jobs.

“Just six months ago, the prime minister set out a clear 10-point plan for creating and supporting up to 250,000 British jobs as we level up and build back greener from the pandemic. Today we’re boosting our armoury for the fight against climate change and backing innovators and businesses to create green jobs right across the United Kingdom,” she said.