New electric car hoovers up pollution from other vehicles 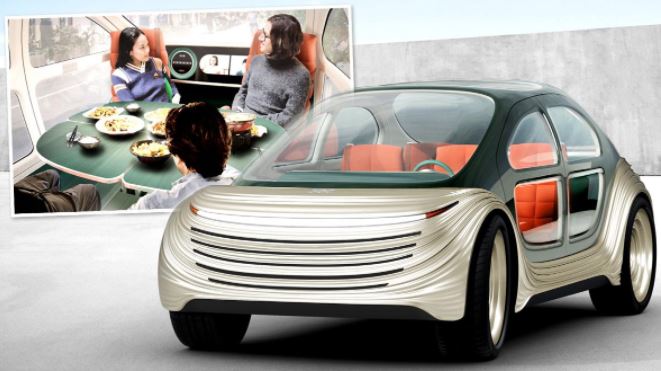 27 Apr New electric car hoovers up pollution from other vehicles

An electric car that hoovers up pollution from other vehicles could be on the road in two years under plans drawn up by a British designer.

London-based Heatherwick Studio has announced proposals for a Chinese-built green car that uses a powerful internal filtering system to suck in pollutants that can contribute to breathing problems and even premature death.

Under the proposal, the Airo car is also capable of being used in driverless mode, with a flexible interior designed to be easily reconfigured to suit different needs. This includes creating a dining room-style space complete with a table and facing seats to allow occupants to enjoy a meal or reclining seats that can be turned into a double bed.

Airo, unveiled at the Shanghai Motor Show, is likely to be one of the cleanest vehicles on the market by producing no exhaust emissions of its own while cleaning those generated by other cars. It is expected to go into production in 2023.

It follows the launch of a bus along similar lines in the UK. Go-Ahead, the transport operator, trialled a single-decker bus in Southampton that uses fans to direct pollution into a filter system. The buses are designed to remove up to 99.5 per cent of ultra-fine particles up to a height of ten metres.

The UK government has already announced a ban on the sale of new petrol and diesel cars by 2030 as part of a drive to improve air quality and reduce greenhouse gas emissions. Air pollution is estimated to cause 40,000 premature deaths in the UK every year and The Times has been calling for tougher action on the issue as part of our Clean Air for All Campaign.

Heatherwick created the Airo car for the new Chinese electric car company IM Motors. It was founded at the end of last year by SAIC, China’s largest carmaker, and Alibaba, the e-commerce giant. 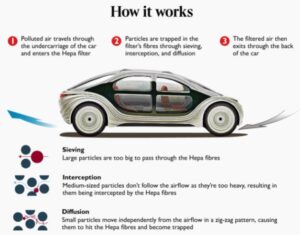 It will be fitted with a high-efficiency particulate air (Hepa) filter within the body of the car to suck in and clean the air around it. Hepa filters, which are already commonly used on aircraft to clean up the cabin environment, force air through a fine mesh system that traps 99.9 per cent of harmful particles.

Heatherwick, the designer of London’s new Routemaster bus, which was unveiled in 2010, said that it “actively cleans the air from the pollution of other vehicles as it passes through the undercarriage, leaving the air around it cleaner”.

Inside the car, it will have seats that rotate from a traditional forward-facing driving position to face those in the back when the vehicle is being operated in autonomous mode. It contains a table that can be unfolded to be used for dining or a foldaway screen for entertainment.

Additionally, the seats can be reclined to create a double bed, with the glazed roof becoming opaque on command to give the occupants privacy.

The UK government has already announced plans to allow driverless cars to be operated on motorways, possibly by the end of this year. Experts have said that they could be a common sight on roads within the next decade.

Thomas Heatherwick, the designer’s founder, said: “Airo isn’t simply another electric car that doesn’t pollute the air. Instead, using the latest Hepa filter technology, it goes further by also vacuuming up pollutants from other cars as it drives along.

“Designed to simultaneously address the global space shortage, Airo is also a multi-functional room with extra space for dining, working, gaming or even sleeping.”