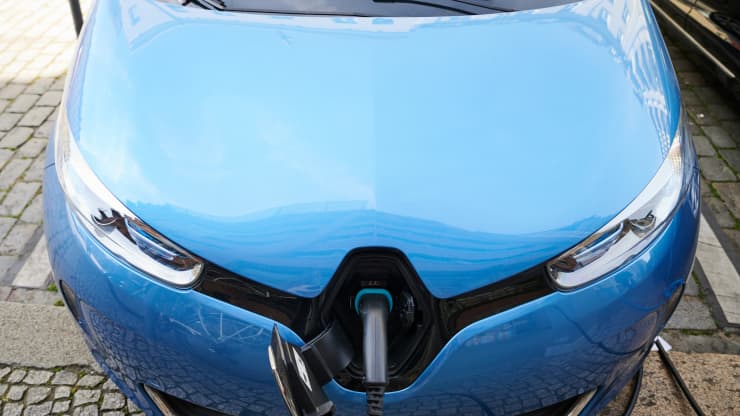 Renault announced Monday it had signed “two major partnerships” related to the design and production of electric vehicle batteries, becoming the latest automotive firm attempting to get ahead of the competition in the increasingly crowded field of e-mobility.

In a statement, the French carmaker said it would partner with China’s Envision AESC, which is set to develop a gigafactory in Douai, northern France. Renault said this facility would have a capacity of 9 gigawatt hours by the year 2024 and aim to grow to 24 GWh by the year 2030.

Envision AESC is part of the larger Envision Group, a self-described “greentech” firm headquartered in Shanghai. Renault said Envision AESC would invest as much as 2 billion euros ($2.38 billion) “to produce latest technology, cost-competitive, low-carbon and safe batteries for electric models.”

Monday also saw Renault announce it had signed a memorandum of understanding to take a stake of more than 20% in a French firm called Verkor. Other shareholders in the company, which is based in the French city of Grenoble, include Schneider Electric, Capgemini, EIT InnoEnergy and Groupe IDEC.

In its own statement on the deal, Verkor said: “Under the partnership, the construction of Verkor’s first Gigafactory will start in 2023. Initial capacity will reach 16 GWh, of which 10 GWh are for Renault Group, with a total annual capacity target of 50 GWh by 2030, of which 20 GWh will go to Renault Group.”

The company added it would also push on with plans to construct a research and development facility focused on the design of “innovative battery cells and modules.”

Renault is not unique in focusing on the production of batteries for electric vehicles. Back in March, Germany’s Volkswagen announced it was aiming to establish several “gigafactories” in Europe by the end of the decade.

“Together with partners, we want to have a total of six cell factories up and running in Europe by 2030,” Thomas Schmall, who is CEO of Volkswagen Group Components, said in a statement at the time. This move, he added, would guarantee “security of supply.”

According to VW it’s expected that, once fully up and running, the factories will be able to manufacture battery cells with a combined energy value of 240 gigawatt hours each year.

All of the above comes at a time when governments around the world are attempting to ramp up the number of electric vehicles on their roads in order to tackle air pollution and move away from the internal combustion engine.

The U.K., for example, has announced plans to stop selling new diesel and petrol (gasoline) cars and vans from 2030. The European Commission’s “Sustainable and Smart Mobility Strategy,” meanwhile, wants at least 30 million zero-emission cars on the road by 2030.

Change does seem to be on the cards. At the end of April, a report from the International Energy Agency stated roughly 3 million new electric cars were registered last year, a record amount and a 41% rise compared to 2019.

More recently on Monday, Wood Mackenzie said battery electric vehicles would become “the dominant form of road transport by 2050, accounting for 56% of all vehicle sales that year.” By contrast, internal combustion engine vehicles will make up just 18% of sales, it added.

According to a report from the research and consultancy firm, there will be 875 million electric passenger vehicles on the road by the middle of this century, a figure that will be complemented by 5 million fuel cell vehicles and 70 million commercial EVs.

“Net-zero is the new mantra and road transport is one of the low-hanging fruits,” Ram Chandrasekaran, who is head of road transport at Wood Mackenzie, said.

“A growing list of countries and automakers are committing to carbon neutral targets and this has completely transformed the global road transport landscape,” Chandrasekaran added.